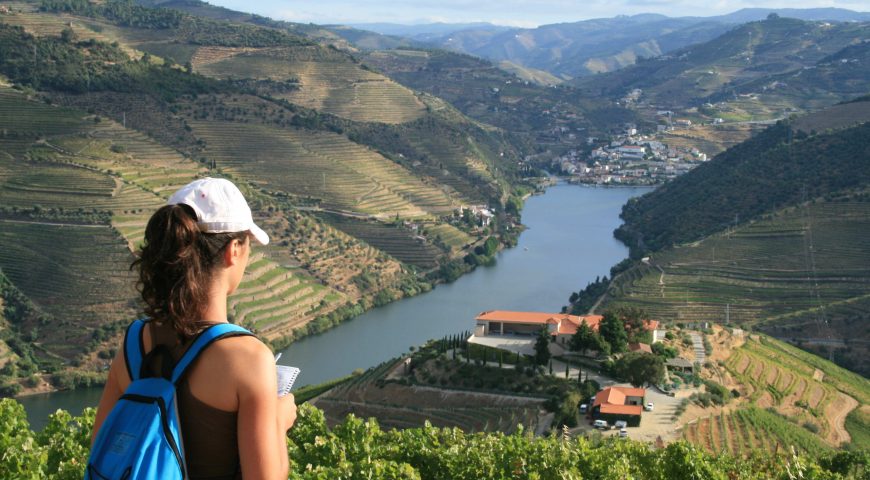 Two things surprised me when I spent a week walking in the Douro Valley. One was the sheer variety and beauty of the views and landscapes and the other was how quickly I got better at walking up hills. I also felt that I had a more intimate connection with an understanding of the region and its inhabitants, simply by observing the work going on around us.

Over several days, my companion and I walked a loop from the village of Pinhão, named after the tributary river that flows into the Douro River, up one side of the Pinhão Valley to the outer edge of the wine region and back along the opposite ridge. I lost count of the number of times we crossed the Pinhão river and how many wineries and villages we passed, although most of the time we were in a picturesque countryside that was only occasionally punctuated by buildings.

Villages in the Douro Valley

While the villages and hamlets are scattered throughout the hillsides, they all share an intriguing mixture of grand manor houses, mostly abandoned long ago, modern homes and rustic cottages complemented by traditional communal laundries and water fountains and at least one church or chapel.

Entering one of these close-knit communities feels like stepping back in time, especially when you venture into the traditional bakeries in Favaios, for example. Unless it’s lunchtime, there is almost always a small group of elderly men sitting on a bench, a dog lazing in a doorway, a cat watching from a wall and some chickens in a coop. Other villagers will be busy tending their vegetable plots and family vineyards.

Quintas in the Douro Region

The quintas (wine estates) we encountered ranged from fully-functioning wineries with tours and tasting programmes to totally abandoned buildings. In these cases, most of the vineyards themselves were still being cultivated and the grapes will be sold off to larger wine producers. I found it interesting to see the difference between the neat, crisp lines and patterns of the major players’ vineyards and the softer-edged terraces of the older ones.

Schist in the Douro

One of the major factors in Douro’s unique terroir is the schist stone and soil, which enables the vines to survive the hot dry summers without the need for irrigation. When you’re walking through this landscape, there’s no escaping schist stone: shards of schist form the tracks, blocks of it are used to build dry stone walls for terraces, to line lanes and construct buildings and massive boulders serve as gateposts and markers at the entrance to quintas.

As I mentioned before, I’m not great at hills but there’s no way of avoiding them in the Douro wine region if you want more than just a short walk. As the saying goes, “no pain, no gain”, and the views more than compensate for the effort of hiking up and down slopes.  Luckily, the steepest of them were on the first day, after which my legs started to get used to the idea and by the end of the week, I felt remarkably fit.